Actually, all that usually can be said about how Michigan goes politically is that’s how Michigan went.  The state has a long history of flopping back and forth between selecting Democrats and Republicans in major elections. 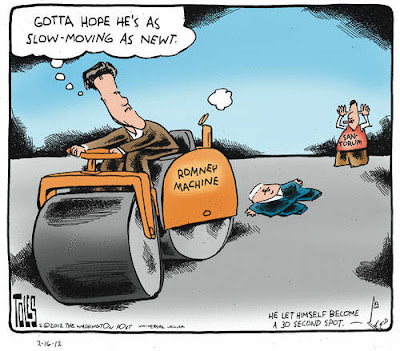 Now Mitt Romney, a major flip flopper according to his opponents, has come back to town.  The Republican primary is happening Feb. 28.  Television ads and political commentaries are cluttering up the landscape.
The mud slinging and misrepresentations are not unexpected, but there is one big surprise.  Romney’s father served as a Michigan governor and also head of now-defunct American Motors.  Mitt Romney was born and raised in Michigan.  Mitt Romney could lose the primary election in Michigan.
Far right-wing darling Rick Santorum rose to the top of the polls recently, gaining a virtual tie with Romney. Six months ago no one would have predicted that.  Santorum won support in Michigan, as elsewhere, because of his strong appeal to the tea partiers who are playing major roles in Republican candidate selection.
Western Michigan is full of social conservatives.  Even in eastern areas of the state where most voters normally are progressives, many consider themselves fiscal conservatives, and they are worried about the national debt.  In addition to claiming “favorite son” status, Romney loudly proclaims himself to be a lifelong conservative who would apply business principles to correcting the federal balance sheet.  So why isn’t he running far ahead in his “home” state?
For one thing, Romney’s attempts to portray himself as a local boy who in his words, “always loved Michigan,” are pretty lame.  He did spend his early years at the family home in a suburb of Detroit, where he attended an exclusive prep school.  But after that he hasn’t been seen often in these parts during the past 40 years.
Romney went off to college at Brigham Young University, as many good Mormon boys and girls do.  Bachelor’s degree in hand, he enrolled at Harvard for degrees in law and business.  He founded a financial company in Boston in 1984, entered politics in 1994 by losing a senatorial contest in Massachusetts, and later served as governor of the Bay State. He never has lived in Michigan as an adult.
Santorum and friends are attacking Romney’s conservative credentials at every opportunity.  A major charge is that the “Romneycare” health care plan adopted in Massachusetts while Romney was governor was the model for “Obamacare” enacted at the federal level.
Romney ran into a problem even when he consistently and steadfastly maintained a conservative position.  He said months ago, and recently repeated to Michigan media, that he opposed federal bailouts of General Motors and Chrysler sponsored by both the Bush and Obama administrations.  It is generally acknowledged that the bailout loans saved both auto manufacturers.
General Motors recently announced from its world headquarters in Detroit a record breaking profit for 2011.  Chrysler sales have improved mightily.  Both companies are once again hiring in Michigan, and GM is planning plant expansions here and in nearby states. Big chunks of the bailout funds have been repaid.
Continuing to say that the proper course of action was to let GM and Chrysler fail while the federal government stood by doing nothing might draw applause in a tea party caucus, but it doesn’t play well in Detroit. Most Michiganders are ardent supporters of the American auto industry, even those who are anti-union and thus could fall into either the Romney or Santorum camps.
Like Romney, Santorum says he does not believe in government help for corporations, except for tax breaks. However, on any other issue you can name, he leans farther right than Romney, or at least he has convinced many tea partiers that he does.
Another factor probably will help Santorum.  The Republican-controlled legislature and GOP governor changed primary election rules after they got a firm grip on political power in Michigan.  Until this go-around, voters received a unified ballot and could make choices across party lines at will.  This year, voters in the primaries can use only a Republican or Democratic ballot. It could be that the change won’t have as much effect on cross-over voting as the Republicans apparently hoped for.
There’s much talk on the political grapevine, and some out in the open, about the intention of many dedicated Democrats to ask for a Republican ballot and vote for Santorum.  They believe Obama will have a much easier time in November running against the radical ex-senator than the more moderate Romney.
There could be a little bonus here for Romney. Should he lose the Michigan primary it may not be a mortal blow. He could blame a defeat on those tricky Democrats as he once again exits the state.
We’ll soon see what happens.  As Michigan goes, so might the nation.  But don’t count on it.
Posted by Dick Klade at 10:33 AM

Oho is pretty similar to Michigan -- right now we're both stuck with wacko GOP governors and we've both lost lots of jobs. I suspect that will mean some changes. Santorum scares me and Mitt does, too, but for different reasons. It looks like Obama has me again despite that he really hasn't improved my life. Then again, I think I'm beyond hope of that happening.

Are these new captcha letters goofy or what?

Excellent piece! Glad you call attention to the fact Romney is a Michigander in name only (Michelle Bachmann didn't win the Iowa caucus, either - same story!) If he loses in Michigan that will be important, even shocking, but the press makes far too much of the fact it's his "home" state.

Also, by the way, thought you should know your use of the word "Michigander" inspired me, after about 50 years of curiosity, to go find out its origin - and to write a post about it on The Tin Lizard, appearing today.

Sigh... Frankly, I think the whole Republican primary is one big, long circus. I'm avoiding saying "joke." Every time there's a change in the front runner the others attack him, spending all their campaign money.

I see the Democrat party is trying to upset the Michigan Republican primary....again.

Hope you watched the debate last night. R is not so much of flip-flopper as some think.

Still don't have a favorite. I am totally disgusted. Dianne

Interesting! Calif. just did the reverse, eliminating having to register with a specific party, then choosing from only that party's candidates. I was thrilled with our change and am anxious to see how well it works.

I have mixed feelings about the idea of sabotage party voting,but can believe some will do it.

Michigan family member frustrated encountering far too many types far too willing to vote against their own best interests who don't realize it.

Dick Klade
I started working shining shoes at age 10 in my northern Wisconsin hometown. After graduating from the University of Wisconsin with a degree in journalism, I served as a weekly newspaper editor,a daily paper sports editor, and a writer- editor for several companies in public relations and sales promotion areas. I settled into a 24-year career with the U.S. Forest Service in public and technical information posts, retiring as Director of Research Information in the Intermountain West..

The Geezer may without notice add comments received by e-mail or snail mail to individual posts. Text may be edited for these and other comments.